Most, if not all, wood products professionals around the globe are familiar with Douglas-fir, the ‘king’ of Pacific Northwest wood species; and the species has a connection to Oregon in particular.  For example, when I was in Chile I saw signs at furniture stores that were all in Spanish except the phrase “Oregon pine”, a common name for Douglas-fir outside the US.  And on a recent trip to Australia there was some initial confusion when I began a presentation about the “Oregon wood products industry.”  The participants were wood products industry professionals and I soon learned they more accustomed to thinking of ‘Oregon’ as a wood species (Douglas-fir) rather than a state!  Douglas-fir is still unrivaled as the dominant species in terms of volume and value in the Pacific Northwest.  However, a couple other species are gaining traction in recent years.  Here I’ll focus on just 3: red alder, hybrid poplar, and western juniper.

The story of red alder is quite well-known at this point and therefore we won’t devote much space to this species.  As recently as just 3 to 4 decades ago, alder was considered a weed and the primary interest in the species was how to kill it.  And why?  Primarily to make room for Douglas-fir, of course!  But attitudes changed – and quite rapidly and dramatically.  In 1995, Cohen and Goudie found that alder represented 40 percent of the hardwoods used in the California furniture industry – more alder was used than red oak.  More recently (2006) and looking at a larger region, Nicholls and Roos found that alder was third in volume use (behind maple and oaks) in the southwest US secondary wood products industry.  Alder is now the Northwest’s dominant hardwood species by a wide margin.  The species is common in all the markets for other well-known hardwoods – cabinets, furniture, turned items, flooring, and upholstered furniture frames.  The wood is sliced for veneer for hardwood plywood as well.  As is typical for hardwoods, low-grade stock is used for pallets.  Alder is now a well-known and valued species.

So let’s look at a couple other species gaining attention in the Northwest in recent years.

There’s been significant interest in hybrid poplar in the Northwest, and around the globe, for decades.  However, it’s only been within the last few years that we’ve really seen significant developments in the manufacturing and marketing of hybrid poplar lumber and veneer.  But first, we should define ‘hybrid poplar.’   We find quite a bit of confusion in the forest industry due in large part to the popularity of yellow-poplar.  A poplar is a poplar, right?  Unfortunately, no.  Hybrid poplar and yellow-poplar are in no way related, well aside from the fact that both are hardwoods.  But that’s about as helpful as saying hard maple and Brazilian rosewood are both hardwoods.  In very simple terms, hybrid poplars are the result of cross-fertilizing species in the genus Populus.  This genus includes species such as quaking aspen (Populus tremuloides), eastern cottonwood (Populus deltoides), black cottonwood (Populus trichocarpa), white poplar (Populus alba), black poplar (Populus nigra, one variety of which is known as Lombardy poplar), and many others.  For the sake of discussion, the scientific name of yellow-poplar is Liriodendron tulipifera – so again, yellow-poplar isn’t a poplar at all.

Researchers have been working for decades to develop poplar crosses/hybrids that grow rapidly, are straight, wind-firm, disease-resistant, etc.  The trees are often planted as short cuttings (approx. 12-inch ‘sticks’) or longer ‘whips’ (approx. 6 to 8 feet – to minimize deer browse).  The trees are often pruned and reach sawlog size in just 10 to 12 years.  In the Northwest, there has been consolidation of several plantation ownerships such that one company (Greenwood Resources – GWR) owns approximately 25,000 acres of hybrid poplar in the Columbia Basin of Oregon.  And GWR has partnered with Collins Companies to build and operate a sawmill in the middle of the plantation and more recently with Columbia Forest Products to build and operate a veneer mill on the plantation.  With production of approximately 100 million board feet per year, the sawmill is one of the largest hardwood sawmills in North America. 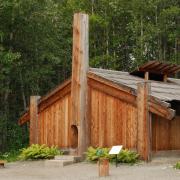 Last but not least, we have western juniper.  This species is unique to the intermountain west with the majority of the volume in the high desert of eastern Oregon and northeast California.  Some consider western juniper to be a native, but invasive species; in Oregon alone the species has expanded from about 1.5 million acres in 1930 to 6.5 million acres today.  As juniper trees dominate a site, there is increased erosion, reduced stream flows, declining forage production, and alteration of wildlife habitat.  Therefore, there is significant interest among landowners to thin the species.  However, harvest costs are high in the absence of markets.

People are often surprised to learn how far back efforts go to develop markets for western juniper wood.  As early as the 1920s, juniper wood was tested for use as a substitute for cedar in pencil stock.  In the 1940s and 50s research was conducted on essential oil distillation and hardboard production.  Dry kiln schedules were developed in the 1970s and during that time there was a sawmill producing lumber, paneling and other value-added products from western juniper in central Oregon.  Through the 1990s thousands of acres of juniper were harvested and chipped in northeastern California; the primary use was boiler fuel for cogeneration facilities.  And now again in 2014, there are focused efforts to develop commercial markets for western juniper.  So what’s the hold-up – why isn’t there a thriving juniper industry after several decades of effort? 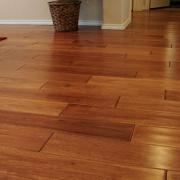 Most juniper trees are short, highly-tapered, and have large, numerous limbs that often go all the way to the ground.  The logs often have included bark seams, and the stocking levels (trees per acre) are often quite low.  As a result, the trees are difficult and quite expensive to harvest and the yields of quality lumber are low.  However, the wood has some unique properties – it’s aromatic and very durable.  If you’re familiar with eastern redcedar (also a juniper – Juniperus virginiana, a.k.a. aromatic cedar or Tennessee redcedar), the aroma is quite similar.  And field trials in-place since the late 1920’s have shown that juniper fence posts have outlasted all other western species (Morrell et al., 1999).  The essential oils have biocidal properties as well; for example, pine blocks impregnated with oils extracted from juniper foliage repelled termites and decay fungi (Sichamba et al., 2013).  So again, juniper has some unique properties that may enable the species to enter higher-value markets.  Efforts underway now are focused on developing the supply chain for logs and finding the right combination of markets able to use lower-grade lumber (e.g., landscape timbers and posts) as well as to develop new markets that can capitalize on the species’ unique properties.

To sum it up – yes, it’s true, Douglas-fir is still king in the Pacific Northwest.  However, the region has a few ‘new’ or at least, lesser-known species that are garnering significant attention.

https://commons.wikimedia.org/wiki/File:Wood_flooring_made_of_hickory_wo… This file is licensed under the Creative Commons Attribution-Share Alike 3.0 Unported license.